Halloween came early this year for the students at the Staten Island Academy, but no one seemed to mind. This year, just like every other, we hosted our annual Halloween assembly. As years have gone by at the Academy, the costumes have become more and more creative. Halloween 2015 saw the high school students reach a whole new level of creativity.

As you all may or may not know, the senior class has a tradition of doing a group costume for Halloween. This year the whole grade decided to dress up as characters from Nickelodeon. Some students wore costumes depicting characters from The Fairly Odd Parents, while others dressed up as the cast from shows such as Legends of the Hidden Temple, SpongeBob SquarePants, and Dora the Explorer. All the seniors seemed to have a fun last experience during the Halloween assembly. Ryan F., a senior, who portrayed the father of Timmy Turner from the Fairly Odd Parents, said, “It was unforgettable. Partnering up with my classmates for the last time made me realize how far we have come together as a class and a family. Halloween will never be the same without them.” 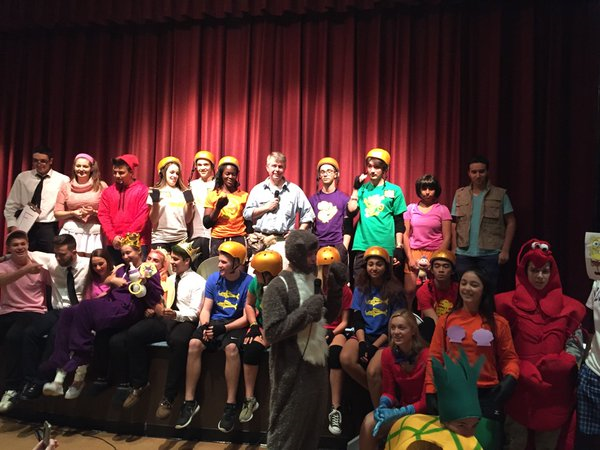 Other costumes stood out from among the upper school students. Sophomore Matt S.’s impersonation of Chief Keef was very creative and well put together. Another sophomore, Liz A., went a different route, opting to dress up as Darla from Finding Nemo. Our personal favorite was from freshmen, Damola S., who dressed up as Michael Jackson.

The students weren’t the only ones to have all the fun! The faculty pulled out all the stops too. Ms. V-Q depicted Catrina, a popular figure from the Day of The Dead holiday in Mexico. She looked alluring with her face paint. Dr. Ward dressed up as a spider web! She was very excited about the tattoos all over her body. Ms. G was very creative in making her costume as well. She portrayed a chef and identified herself as, “Cooking up a Book”.

Clearly this Halloween was one to remember. The beautiful weather and enthusiastic Staten Island Academy students both contributed to making the 2015 Halloween one of the best ones yet!

Isn’t that how we all feel sometimes? These are the opening lines to the song “Castle,” the first song off of Badlands by Halsey. Halsey, whose real name is Ashley Frangipane, is the new girl on the block—shortly before releasing Badlands in August, she released her first EP, Room 93, which included two songs off of Badlands.

The album starts strong with slightly more alternative “Castle” before delving into mainstream pop. In particular, “New Americana” has a summer feel to it. Though Halsey is from New Jersey, “New Americana” exposes her New York City roots as an artist.

“Hurricane” and “Ghost”—two songs which originally appeared on Room 93—feature clever lyrics and hooks that will be stuck in your head all day, even when you haven’t learned all the words yet. A particular favorite of mine is from “Hurricane”: “I’m the violence in the pouring rain/I’m a hurricane.”

Another catchy, ear-worm inducing song is “Roman Holiday.” While the title doesn’t make it sound like a mainstream pop song, this track is about as typical pop as Halsey offers on this album. It’s a great love song and a great summer song, even if the lyrics talk about going swimming in December.

Though the album starts off as pop with an urban, alternative twist, the second half is more reminiscent of indie and alternative pop. The last few songs are truly where Halsey’s vocals and lyrics shine.

In “Coming Down,” the void created by the absence of heavy electronic beats is filled by Halsey’s great vocals. This song is probably the closest thing to a ballad on this album, but still quite upbeat.

“Haunting” is sort of like a darker Taylor Swift breakup song. While the lyrics are a bit creepier than those of “We Are Never Ever Getting Back Together,” I think Halsey and Taylor have a bit in common. Speaking of Halsey and Taylor, Halsey, under her real name Ashley, posted a video on YouTube parodying a Taylor Swift song. The video is called “The Haylor Song.”

If you’re into something more unique, maybe the songs “Gasoline” and “Control” are for you. “Gasoline” features unique sounds and great lyrics. “Control”, on the other hand, may not be so relatable; unless you hear voices in your head, in which case, this is your song, but Halsey’s voice in the song is amazing. The album ends strong with “I Walk the Line,” which is darker and simple.

All in all, Badlands is something different and refreshing in its brutal honesty. Halsey’s debut album can be recognized by its relatable lyrics, catchy melodies, and a distinct collection of sounds from different genres.

Behind the Scenes, Video 2
By: Yvonne B.

It was a chilly Sunday afternoon as the official start day of Tech Week began for The Odyssey’s opening show on Friday. The tech crew’s first day running through the show worked out perfectly; however, the same could not be said for the cast. The rehearsal started late, unfortunately, due to some snafus. Some cast members did not know their lines, while others were simply confused as to what was going on. Although Mr. Weissman felt a mix of anger, disappointment, and sheer anxiety, he has full confidence that we—as a group and SIA community—can all pull it together and make this show a great one.