To cast, crew, Mr. Weissman and all,
Rave review from this audience member for your performance of Anything Goes. 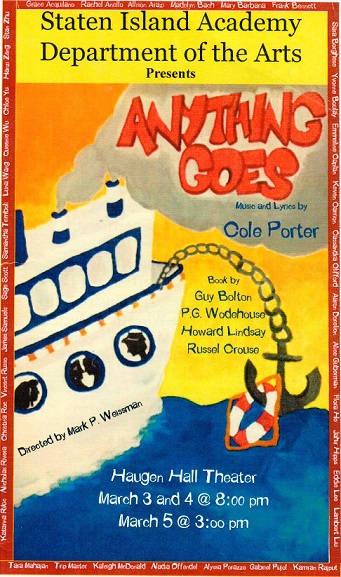 Never knew we had so many talented tap dancers!
What a delightfully delicious and “delovely” way to spend a chilly Sunday afternoon!
Kudos.
Mr. Rapp
P. S. The Quill staff congratulations the members
of the musical production on a job well done!

It’s hard to believe people so young could display such maturity and depth of emotion. As the voices rose in a musical medley, singing “Will I,” the echoes of hope and despair rang true. Whether depicting the heated battles between partners Maureen (Alice G.) and Joanne (Alexa F.), the fiery spirit and unbreakable of Mimi (Yvonne B.), the friendship in the face of terrible disease amid Roger (Jahir H.) and Mark (Daniel B.), or the undying love despite death between Angel (Gabriel P.) and Collins (Trip M.), these students knew how to pull at the audience’s emotional heartstrings. 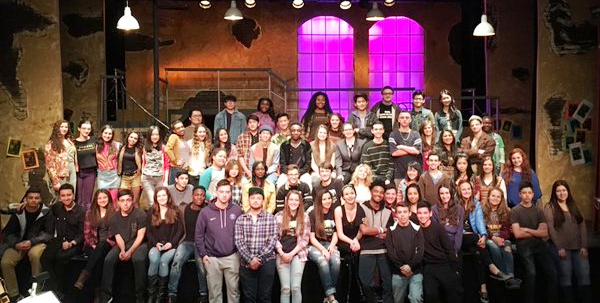 While the stars of the show certainly shined, the rest of the cast and crew could not be ignored. Stellar performances from Grace A., Chris C., Tara M., Mia W., Mike T., Katarina R., and A’Mit L. stood out, but only name a few of the handful of superb actors and actresses on the stage. Ryan A.’s non-stop percussion performance accented the heartbeat of the show. Theater crew, including Assistant Director John H., and the ever unstoppable guru of the performing arts, Director Mark Weissman, put on the production of a lifetime. 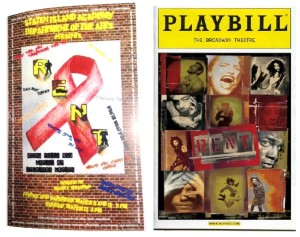 I danced to “La Vie Boheme,” laughed at “Take Me or Leave Me,” grooved to “Santa Fe,” rejoiced in “Seasons of Love,” cried in “Without You,” and cheered wildly at the “Finale.” As a high school student when Rent first appeared on Broadway, I grew up to the music of the show. It was edgy, different, and touched on chords especially present in that tumultuous time between childhood and adulthood. Seeing it performed by the Staten Island Academy students took me back to that time; although the play is as relevant now as it was then. It demonstrates a different side of theater, the kind that doesn’t shy away from difficult subject matter, but instead puts it on the stage for the audience to reject or embrace. No matter your take on the show, the give-it-all attitude from these talented teens cannot be denied and would win over even the staunchest critique. Bravo, SIA! Bravo! 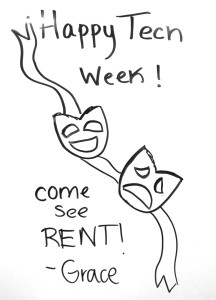 Backstage during the rehearsals, the actors are working hard and so is the stage crew.  At the beginning of tech week, the heads of each wing created a cue sheet, consisting of time and placements for the stage crew to bring props out and place them on their designated spikes. This had props working on their toes. We have to make sure to give the cast what they need when they perform, and practice so that it’s perfect for the production. Overall, tech week was strenuous and stressful for the cast and crew, but this resulted in everyone pulling together to put on an amazing show!

On a beautiful Sunday afternoon began the long week we had all been looking forward to… Tech Week: Rent Addition. The five hour rehearsal ran through the entire show with stage crew joining the cast to plan and learn the placement of tables, chairs, props, and lighting. Since costumes had not yet arrived, running the show with them will hopefully begin Monday. The cast is especially looking forward to meeting  Adam Pascal, the actor who originated the role of Roger, and will be joining rehearsals Monday. During this rehearsal we will have a Q & A with Mr. Pascal and he will watch a few numbers of the show to give his feedback. So far, this week is starting off pretty strong with the cast anxious for opening night to arrive.